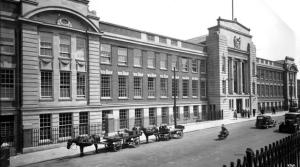 The University of Wolverhampton’s city-centre campus is the geographical hub of an educational institution dating back to the nineteenth century. The Millennium City of Wolverhampton is situated in the West Midlands, the former industrial heartland of the UK and consequently a region that is no stranger to salvage in a variety of guises.

Wolverhampton enjoys excellent transport links with Birmingham, Manchester and London and their respective airports, as well as other parts of the UK. It is also within easy reach of important cultural heritage sites such as Ironbridge, birthplace of the industrial revolution; Stratford-upon-Avon, birthplace of Shakespeare and now a living heritage centre; and Lichfield, birthplace of Samuel Johnson, and where Erasmus Darwin lived and laboured in the shadow of the city’s imposing cathedral.

Further information regarding university and hotel accommodation options will be published on this page in due course, as will details of and links to travel information.